During the BACC II presentation in Copenhagen, I took the opportunity to ask Deliang Chen of the University of Gothenburg, Sweden, a few questions. Deliang has been an important figure in international research coordination for many years. From 2009 to 2012 he was Executive Director of ICSU, the International Council of Science (ICSU). This international organization has committed itself to strengthen international science and scientific collaboration on the global level for the benefit of society. The transition of the Earth System Science Partnership programmes and the birth of Future Earth fell into Deliang´s term at ICSU. 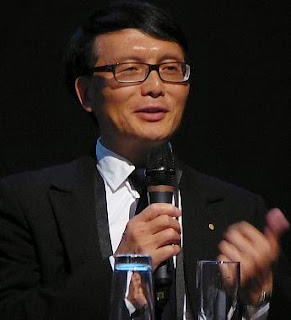 Q: What raised your interest in climate scienc

Q: During your time at ICSU, how has the international research landscape changed (with respect to environmental change programmes) and how to you rate that change?

A: A lot of things happened during my tenure at ICSU (2009-2012). As you know, ICSU have many activities, but the leadership for global environmental change programmes (IGBP, IHDP, WCRP, Diversitas and their partnership ESSP) is probably the most important one. I would say that the most important change is the mindset of the global scientific community. Having realized the crucial role that human activity plays and the great need of society for scientific input to achieve sustainability, the community is more ready to move towards truly integrated Earth System Science and to take the responsibility to find new ways to co-design and co-create knowledge involving a broad range of social and engineering communities, as well as with other stakeholders. I think these changes are necessary and great since all scientists also have social responsibility through our basic and applied research activities. While fundamental research is often disciplinary and curiosity driven research is always needed, solution oriented research with in-depth disciplinary knowledge and transdisciplinary approach provide effective means to deliver useful and relevant knowledge to society.

Q: The new BACC book has just now been finished. What are the main differences to the well-known IPCC reports?

A: To me there are two main differences with regard to government involvement and scope. IPCC is a UN body under influences of governments, while BACC represents a bottom-up process involving scientific communities in the region. The IPCC report focuses on climate change issues only, whereas BACC also dealt with non-climate issues such air pollution. Besides, IPCC has three separate working groups and reports, whereas BACC has integrated various aspects in one volume. The political aspects of IPCC are sometimes seen as something negative. But it is absolutely necessary as it is meant to serve as a common basis for interaction negotiations on climate change. BACC enjoys the full independence compared to IPCC. But it may need additional efforts to reach out to the policy and decision making communities afterwards, to make it more useful and accessible to the nonacademic readers. It is clear that the regional focus of BACC report offers a great potential to be useful for the region. However, nothing automatic should be expected. Finally, since the future scenarios of BACC depend on IPCC report, the two efforts are really complementary.

Q: You are in the new Baltic Earth advisory committee. Where do you see Baltic Earth in the international research landscape?

A: I see Baltic Earth as a mutual community and network with a great potential for research development and service to society in the Baltic Sea region. It had some links to WCRP through GEWEX which focuses on water and energy balance. Now that both Baltic Earth and international research landscape have been changed and is changing, there is an opportunity for Baltic Earth to find its new role and its relation with global research programmes. In this regard, I am thinking specifically on a new framework towards regional Earth System Science for sustainability in the region, and the new global research program Future Earth which is becoming “the game of the town” for Earth system science for global sustainability.

Q: What would be your advice for Baltic Earth in the long term?

A: I would say that the most important thing is to keep focusing on added value and synergy in the changing world and remain relevant and inspirational.

Q: Tell us a little bit about your current research activities.

A: At the national level, I am involved in two Swedish national strategic research programs BECC (Biodiversity and Ecosystem services in a Changing Climate) and MERGE (ModElling the Regional and Global Earth system). I am also leading a project to develop a framework to support climate-adaptation actions in Sweden with a focus on extremes such as flooding and drought. At the international level, I am involved in statistical downscaling activity for VALUE (a COST action) and CORDEX (a WCRP project). Overall, my main focus has been on a project looking at climate change and its impact on water balances in Tibet. I visited Tibet in 2011 and have since then developed a strong interest for the regional. Recently, I joined a group of more than 80 Chinese scientists in making an Environment Change Assessment for Tibet, which is similar to the BACC effort.

Thank you, Deliang, for this interview!

Posted by Marcus Reckermann at 13:58

How to use this blog

BACC I and BACC II Lead Authors and SSC members have the right to submit postings, i.e. to begin new threads. Anyone can respond and comment. Just click on the comment line. Postings may also be sent to Marcus Reckermann and Hans von Storch and will be posted with a short delay.

Please follow the common nettiquette rules, i.e. refrain from insulting language, but be to the point. Please give your name or use an alias - comments from "anonymous" should be avoided.

The BACC Blog is an open platform to exchange views and comments about the BACC project (BALTEX and Baltic Earth Assessment of Climate Change for the Baltic Sea Basin).

The regional climate change assessment report for the Baltic Sea basin was published in January 2008 (BACC Author Team, 2008). The assessment is an example for a type of urgently needed reports helping to put global climate change (as portrayed e.g. by the IPCC reports) into a regional perspective, which local stakeholders and politicians can relate to. The so called BACC (BALTEX Assessment of Climate Change for the Baltic Sea Basin) report was compiled by a consortium of 84 scientists from 13 countries around the Baltic Sea and covers various disciplines related to climate research and ecological impacts. The book is divided in chapters on past and current climate change, on projected future anthropogenic climate change, and on observed and projected impacts on terrestrial and marine ecosystems of the Baltic Sea basin. It aims to bring together consolidated (published) knowledge which has broad consensus in the scientific community. Still, this consensus may at times take the form of “consensus on dissensus”, as for certain issues, contrary opinions cannot be resolved due to insufficient scientific evidence.

An update to this first book (BACC II), authored by 141 authors from 12 countries, was published in early 2015.